Gravitacyjny Korektor Skolioz – GraviSpine (GS) was created on the basis of the theoretical and practical knowledge of the author, gained during 25 years of medical practice in the treatment of several thousand children with scoliosis.
The idea matured for many years, the project was subject to many improvements, and finally it took its present form. The author received a patent for the device No. PAT. PL 222124.

The GS device is a type of lift – an inversion table for the lower limbs, which is equipped with a system of movable side supports, acting in the right place and at the right angle on the curved section of the spine.
The inversion table allows you to place the child lying on his back with his head down about 20-30 degrees. This position creates an anti-gravity environment for the spine, which we use in the treatment to relieve – loosen the intervertebral joints and the intervertebral space – intervertebral discs.
The relaxation of the above-mentioned elements and a slight stretching of the spine create favorable conditions for the correction of lateral curvature and vertebral derotation in scoliosis. During the GS treatment, the action of gravity is combined with the corrective derotation forces of the side supports on the spine, which leads to an effective three-dimensional scoliosis correction.
The special design of the GS allows the system to be moved along the table, which enables precise impact on the selected section of the torso where the spine is curved the most. Also, the direction of action of the pelotte through a specially designed head allows to obtain the desired force vector of the pelotte to obtain the expected derotation of the vertebrae rotated in scoliosis.

Before each procedure, the physiotherapist clinically assesses the asymmetry of the back with the above-mentioned device, marking the peak of curvature on the body with a marker, in order to precisely position the pelottes. The selection of the strength of the corrective action of the pads is individually adjusted by the physiotherapist in direct contact with the child. He initially selects the minimum pressure according to the child’s weight and height table, which defines a certain acceptable range in kilograms. Then, by directly following the behavior of the torso segment when applying pressure, the knob increases the pressure of the pelotte manually, while controlling the measured pressure values on the display screen.
During the three-plane correction procedure on GS and e, the child performs active breathing exercises based on biofeedback. The child under the supervision of a physiotherapist breathes in slowly with the concave side of the curvature until the pressure of the pressure pad on the convex side of the curvature decreases by 2-3 kilograms. This element of therapy is part of the model of learning active self-correction of scoliosis, which is an important element of the specific physiotherapy of scoliosis.

The therapy model is based on:
a) early detection of scoliosis in a child – orthometer
b) stabilization and balancing of body posture – specific physiotherapy,
c) three-plane spine correction – specific physiotherapy, corset, GS,
d) training of posture self-correction
e) education and development of the habit of corrected posture in everyday activities
The model complies with the guidelines and recommendations of the international scientific society SOSORT – Society on Scoliosis Orthopedic and Rehabilitation Treatment, of which the author is an active member.
Scoliosis. “Rehabilitation schools for scoliosis” thematicseries: describing the methods and results
Manuel D Rigo1 *, Theodoros B Grivas2

Security.
Complementary therapy on GS in the method used by the author is carried out with high safety standards. The device has passed positive tests in an independent laboratory confirming the approval of human treatments.

The current shape of GS was created thanks to the author’s cooperation with Przedsiębiorstwo Handlowo-Usługowe Technomex sp z o. O. In Gliwice, as part of the project entitled “Development of a comprehensive program for the prevention and treatment of posture defects in children and adolescents using innovative diagnostic and treatment devices”. No.WND-RPSL.01.02.00-24-064B / 16-002
The project coordinated by the author and implemented by ORL Troniny and the Śląskie Centrum Przedsiębiorczości in Chorzów was selected for co-financing under the Regional Operational Program of the Śląskie Voivodeship for 2014-2020. ( European regional development fund). Priority axis I. Modern economy for action: 1.2. Research, development and innovation in enterprises.
As part of the project, GS- underwent a positive clinical evaluation carried out by an independent clinical center based on the consent of the bioethical committee of the Regional Medical Chamber in Częstochowa No.K.B.Cz-039/2019 of 3 July 2019. The research was conducted in cooperation with the Orthopedic and Rehabilitation Clinical Hospital of Wiktor Dega in Poznań at the Department of Spine Surgery and Pediatric Orthopedics. The positive opinion of the use of GS (GraviSpine) in the treatment of children and adolescents with scoliosis issued by P. Professor Tomasz Kotwicki gives hope for a wider use and promotion of GraviSpine in the treatment of spine diseases. 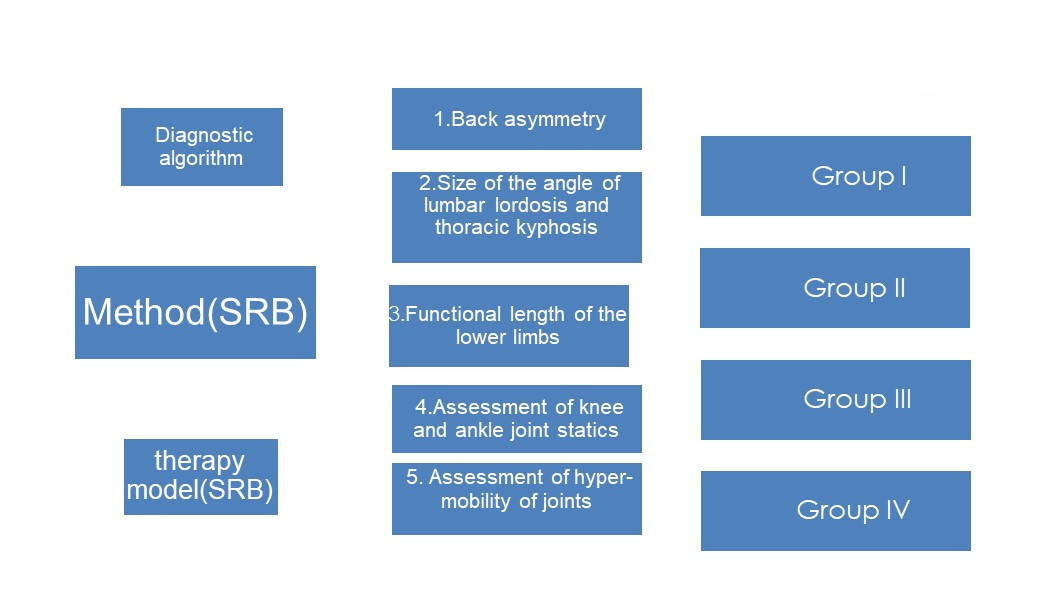 Assessment of the back symmetry in the Adams test in standing and sitting positions. 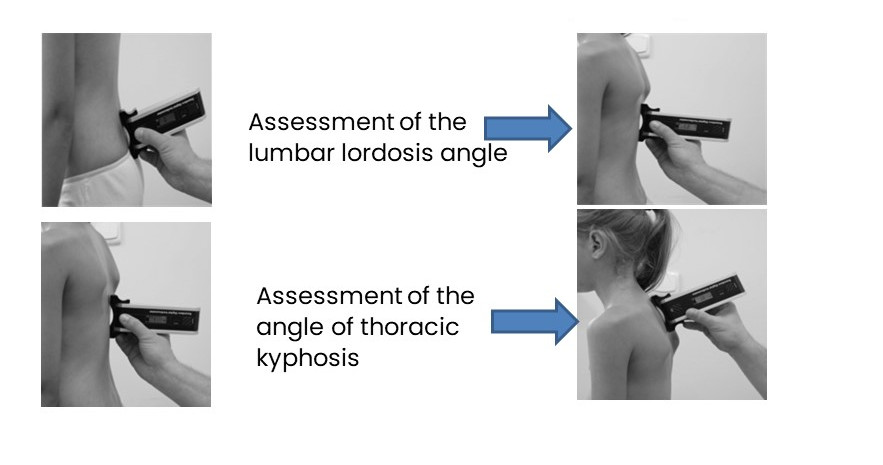 Assessment of joint hypermobility on the 9-point Beighton scale 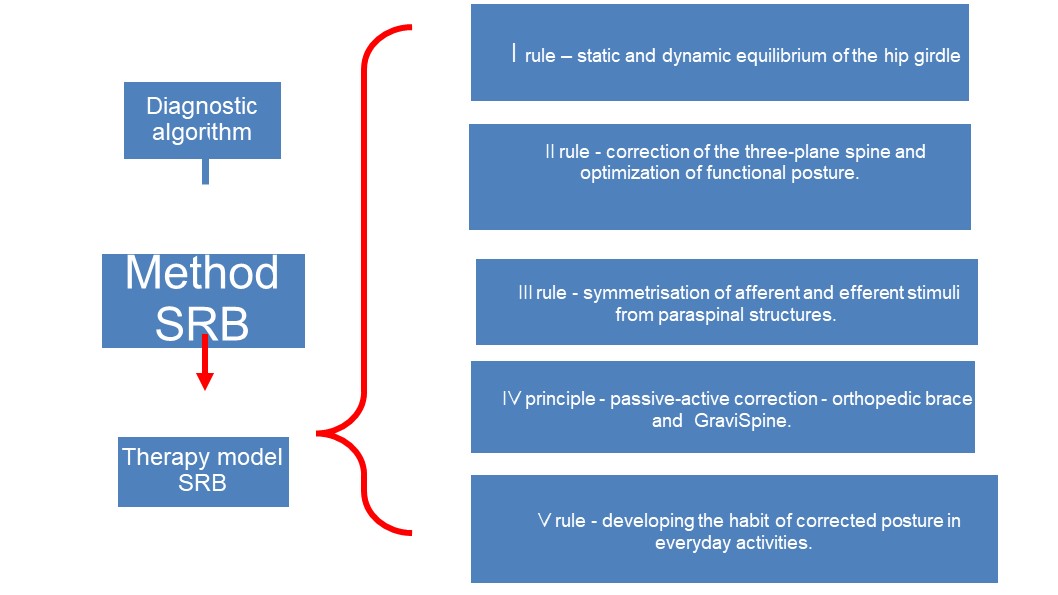 Principle I – static-dynamic balance of the hip girdle

Static and dynamic symmetrisation of the joints of the lower extremities and the pelvis in order to achieve the biomechanical balance of the iliac girdle as a support function for the developing spine.

Striving to symmetrize the body posture in 3 planes through:

The story of Milena, 10 years